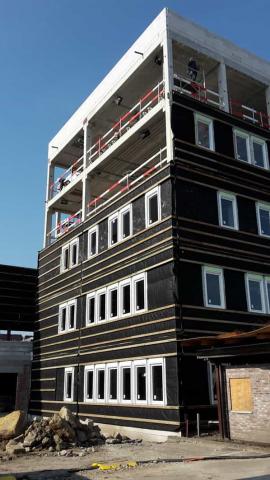 In late 2013, it became clear that the planned merger between the hospitals in Mol and Geel would not be going ahead. In spring 2014, the Heilig Hart Hospital in Mol therefore decided in forge its own path and assess the new challenges and opportunities that lay ahead.

One of these challenges was the addition of a new wing. The design features a café on the ground floor, a collective auto-dialysis (CAD) department on the first floor, a gastrology, enterology and urology department on the second floor, and consultation rooms on the third and fourth floor, with building services being housed under the roof. A gangway will link this new extension to the first floor of the existing building.

Wanting the building to be constructed and delivered as soon as possible, they decided to launch a negotiated procedure with prior publication. This means that the contractor can be involved as early as possible in the process, working with the designer to produce a final construction plan (construction design) for the project. The time frame for the building's construction will be very tight, with the client and architect suggesting around 10 months.

Following extensive consultation, a joint venture bringing together Vanhout, Machiels Building Solutions and Dillen Bouwteam was established for the project. This joint venture decided to submit a tender featuring a prefabricated concrete construction decorated with prefabricated timber-frame façade elements EI60 and EI120. These elements are fitted with PVC joinery at the production stage so the building envelope can be made wind and watertight in a very short space of time. This is vital, given the short completion time, as it enables work to start quickly on the interior finishing and services. Delivery is scheduled for summer 2016, before construction workers down tools for the holidays.